Once, a hypothetical was posed to me:

In one room was a bunch of women.

After a vigorous round of combat aerobics...

She: Stop patronizing me.
Me: You can't even open spaghetti sauce jars.

Being a chess player, I like to think eight moves ahead. And this gambit could only end one of two ways. We square off—WHICH WILL NEVER HAPPEN BECAUSE I WON'T HIT A WOMAN FOR LOVE OR MONEY. Or what actually happened.

Tied up by my own code.

How do you measure love? 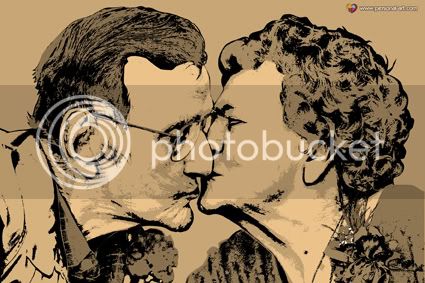 Or, because it's a feeling, does every rational measure fail to grasp? Like a floater in one's eye you can never quite focus your mind upon.

Or, on a more cynical take, is love just a name for an endless quest to unwrap the familar and witness the new?

As a public service, I'm going to drop the Pasquin Rules for Job Seeking on you. But because I'm me, I'll do it in an extremely negative way. As in, please do the opposite of what I'm saying.

Resume
Please send it in an obscure file type. Or better yet, right in the email. Nothing says I-fail-at-technology like that. And why waste valuable time using the spell check that is in EVERY FUCKING program ever. Ignore it. I mean, what does grammar and punctuation have to do with office work anyway? Next you'll be saying my exposed tat of a blue fairy shitting rainbows might leave a bad impression.

Cover letter
Don't include one. Let the boss just guess at why there's a ten year gap in your employment history. Or why as a former rodeo clown you'd make a good accountant. But if you have to, make it full of buzzwords you don't actually understand. And don't tailor each cover letter to each individual job. Egh, that's work. I'm sure when the boss wakes up from reading it, he'll remember how impressed he was.

Contact
No phone number. That's so twentieth century, like when most of your potential bosses would have been born and be accostomed to. But if you have to, leave off a digit. Or area code. Oh, oh, oh, this is a good one: don't have voicemail. That $4 a month can go towards cigarettes and scratch tickets.

But maybe you're right, this is the twenty-first century and everybody does everything by email. Remember to send all replies to tieduplikeacow@bondage.edu. We're all adults here. Come on. And don't worry about file names. Nobody will notice that you called your resume 'fake as shit'. Nobody.

Application
Write 'see resume.' The boss doesn't need to know why you left a job or who to contact for a reference. As with a scavenger hunt, he'll enjoy the hide and seek. Keep telling yourself, it's not laziness AT ALL.

Interview
Don't have interview clothes? No prob. Just show up in what you would for clubbing. Add glitter. That'll tell the interviewer you like people. And while we're on this subject, do most of the talking in the interview. That'll teach'em who's boss. And don't answer questions—they're a trap. And if you're wiley enough to avoid that, he'll agree he was outsmarted and HAVE TO give you the job.

Put ten points on the leader board. You've earned it.

All of the above has happened to me. Particulars have been changed to protect the clueless.

In the United States, if the idea of letting corporations vote in elections gets talked about at all, it’s usually as the absurd logical end point of treating companies like people.

Not so in Australia.

Companies get to vote there. And why not? Is it really so absurd that an entity that is subject to taxation without representation shouldn't get to bitch about it in a voting booth?

Granted, they are talking about making it MANDATORY down under. But if corporations are 'people,' why shouldn't they have the franchise? At one time slaves weren't allowed to vote—women neither. Each was considered property in their day.

I have news for you: Every quarter year, the town where I'm chartered sends me a property tax bill and (once a year) an intrusive form asking how much I make at that location. They intend to use my income as a reason to boost my property taxes. I sent a newsletter back, I ALREADY PAY TAXES ON THAT.

Along with these bills, they send a newsletter talking about how they are renovating this, putting marble on that, and giving every student an iPad with their own personal robot butler to carry it.

And my corporation can't vote?

Somebody should dump tea in the harbor or some shit.

Best description of why I haven't been active on social media:

"Because you're so busy being a dark horse loner and cutting the fingers off your gloves and shit."
-Evil Egg.

After a long conversation about jealousy.

She: ...and so handsome and charming and own a business. What girl wouldn't be attracted?
Me: ...
She: What?
Me: Are you talking about me?

I've been thinking about getting into vaping. You know, ecigarettes. They combine my love of gizmos and sensation. Sort of like my endless quest for the right espresso press and grind.

But I won't vape nicotine.

No. I'll just stick the tip in.

"To ban the word [ginger] altogether would probably just make it worse and taboo words only become more powerful and more offensive."

As a member of the ginger race, with many, many gingerettes to my credit, I'll happily give all you dun heads a swirly Bozo shampoo if you dare meet boot to butt.

Don't let this ginger bashing concern you ruby-hairs, stay hued and vibrant, our day of reckoning over the mousy headed is at hand.
Collapse